So I quite enjoyed that exhibition opening; after a last minute re-create of one of the works and not really knowing what or who to expect, it was quite the fun evening out. I felt very lucky to have had the support of a lot of friends who came along and giggled a lot with me.
I think the funniest conversation of the eve was with an old work colleague (as in she's not old but the work connection is) ...
strangely enough after this experience I think we're a little closer, clearly we are art connoisseurs;
Paddy "Ok so you're seeming a little out of your head right now, let's do the loop and focus on the art pieces and see what we think of everything"
Andy "Ye-ah good plan"
Paddy "So these photos are interesting, they're just pinned up with a magnet"
Andy "Ye-ah I have no idea what I"m looking at, it's just dark with a few white squiggles, is this art? what do think this white light squiggle is about"
Paddy "Not sure but they haven't even been cut straight, do you think that's planned or just laziness?"
Andy "Looks like laziness to me, but Paddy really, what am I looking at?"
Paddy "I don't really know but the title here has galactic in it, maybe it's space related"
Andy "No no, ah no, look, Paddy that's a vagina, see?"
Paddy "Ah yes yes it is, rightio"
Andy "hmm should we move on?"
Paddy "Sure, oh look this one has the nipple" ... ... .
PERFECT work colleague conversation...don't you think?!?!
This aside, the evening was filled with a lot of artistic love, the curator shared how much they wanted to promote me and my artistic party (aka Sally Flegg & Lynne O'Brien) as the feature artists for the entire festival...chuffed much! She just said we just needed a few more pieces and for them to be a little larger ...
"Well I'm sure we can make my head bigger next time if required"
Funny too I get that note all the time in my performance work too - "go bigger"
"Noted!"
Fabulous feedback from the public, who struggled to comprehend how it wasn't all photo-shop
"No that's a zipper stuck to my head"
They also stated that the work was by far the most superior in the place and was radiating a really strong energy. So this was really beautiful feedback for someone who still feels very green in an art space which isn't performance based.
The exhibit is up for the next three weeks at 1000 Pound Bend Gallery, Little Lonsdale St, so if you're in Melbourne city, pop in for a squiz!
And onwards and upwards from this experience...a lot of new ideas have presented themselves for future exhibits both Queer and Mainstream, as well as a big dose of fresh inspiration from such a packed house of people who loved it.
It was also really great to connect with fellow transmen in Melbourne and be part of the inaugural launch of Dude Magazine Australia, the only one of it's kind presenting trans-stories to the wider community. Look out for it in Sydney launching there on Feb 3!
And finally here are some pics for those who weren't able to come along; 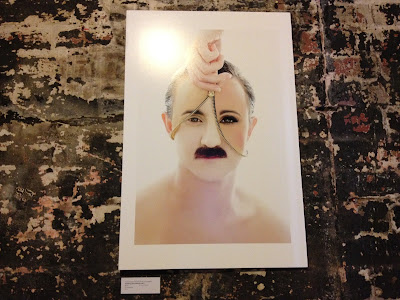 Andrew Guy in simplest terms used to be known as Anna Guy. A trans ’man’ currently living in Sydney, feels he exists in this life simply as a paradox which appears to be problematic for people and finds humour and quirk expressing this through art mediums.
Andrew is an actor / artist and human strongly influenced by a personal philanthropic vision. His recent acting work has raised awareness of living, self-healing, sexuality, gender, domestic violence and depression.
Prior to this he performed in uniquely crafted staged events throughout South Africa; Moscow; London; Toronto and Hong Kong; and has received two Australian Excellence Awards for contribution to global relations and gen y mentoring. 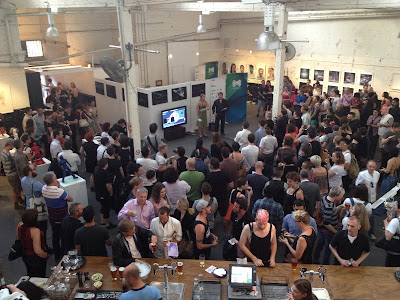