So this is where my blog is going to go little 'below the belt' ... this is in no way meant to offend, only to offer insights into what 51% of the global population have as part of their anatomy. I am going to (in small doses) share the steps involved of how one creates a penis (the process of phalloplasty) that will look, operate and feel 90% similarly to if I had been born into male form, which ultimately is most congruent to me and reflective of the part of my brain (the stria terminalis) which if you viewed via scans would look like the part of a biological male brain.

For someone like myself at this point, the below is fairly pertinent information that I want myself and my chosen surgeon to know intimately.

To start here is some fairly well known (yet less talked about - Cleo and Cosmo aren't quite on it yet!) information about the classified 'female body form' sexual organ. Even though I currently possess this anatomy, through my experience with women, I've begun to understand that it has never functioned quite in the same as a biological female (as in the brain wiring has been running this show in an entirely different way - cool huh!). Or maybe not if you consider that a sexual experience for a female is different every time (if you know what I mean, you know what I mean!).

So to begin (more soon!) ... taken from http://blog.museumofsex.com/the-internal-clitoris/

In over five million years of human evolution, only one organ has come to exist for the sole purpose of providing pleasure – the clitoris.  It is not required for reproduction.  It doesn’t have a urethra running through it like the penis, and thus, does not urinate.  Its sole function – its singular, wonderful purpose – is to make a woman feel good!

Sadly, it is precisely because the clitoris has no function apart from female pleasure that science has neglected to study it as intricately as the penis.

Try asking the next person you encounter to tell you where the clitoris is located.  Having posed this question to others many times myself, I’ll guess that the majority of answers you receive will sound something like, “It’s that small bulb at the top of my lips,” or, “That’s the button up under the hood.”  Although these responses aren’t exactly wrong, the interesting truth is that the majority of the clitoris is actually within the pelvis – that is, it’s far more internal than external.

The scientific name for the external “little button” or “bulb” is glans.  Not to be confused with glands, glans simply refers to a small circular mass.  This little structure contains approximately 8,000 sensory nerve fibers; more than anywhere else in the human body and nearly twice the amount found on the head of a penis.  The glans is connected to the body or shaft of the internal clitoris, which is made up of two corpora cavernosa.  When erect, the corpora cavernosa encompass the vagina on either side, as if they were wrapping around it giving it a big hug. 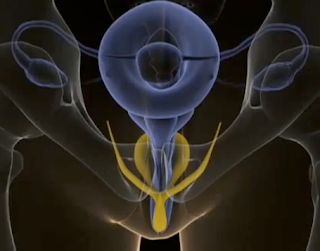 The corpus cavernosum also extends further, bifurcating again to form the two crura.  These two legs extend up to 9cm, pointing toward the thighs when at rest, and stretching back toward the spine when erect.  To picture them at rest, imagine the crura as a wishbone, coming together at the body of the clitoris where they attach to the pubic symphysis.

What does all this mean?  Well, for starters, we can finally end that age-old debate of vaginal vs. clitoral orgasms.

Then in 1970, Germaine Greer published The Female Eunuch, which scoffed at Kinsey’s theory.  She wrote, “It is nonsense to say that a woman feels nothing when a man is moving his penis inside her vagina.  The orgasm is qualitatively different when the vagina can undulate around the penis instead of a vacancy.”

Interestingly, they’re both right.  The vagina is not the sole source of arousal, though to stimulate the inner clitoris you can greatly do so by manipulating, displacing, and exploring the vagina with a penis or other apparatus.

Many women can bring themselves to orgasm without ever inserting anything inside of themselves.  They are causing their internal clitoris to become erect and likely stimulating their glans, bulbs, and crura by rubbing themselves on the outside.  The corpus cavernousum is the additional erectile tissue encompassing the vagina, and greatly erogenous when stimulated internally.

Let’s also remember, female orgasm is not solely about the clitoris and vagina either.  It is far more complex and also involves the workings of multiple nerves, tissues, muscles, reflexes, and mental effort.  Some women can think themselves to orgasm.  Others can orgasm simply by flexing their pelvic muscles.  Considering all the components involved plus the variability of human beings and their anatomies, it’s extremely important to remember no two people are the same. What works for one woman may not work for another.  In other words, it’s all custom under the hood.

Alas it wasn’t until as recent as 2009, French researchers Dr. Odile Buisson and Dr. Pierre Foldès gave the medical world it’s first complete 3-D sonography of the stimulated clitoris.  They did this work for three years without any proper funding.  Thanks to them, we now understand how the erectile tissue of the clitoris engorges and surrounds the vagina – a complete breakthrough that explains how what we once considered to be a vaginal orgasm is actually an internal clitoral orgasm.