A REAL forum story that I'm not even sure I'm allowed to publish ... but it's WHY I'm doing what I'm about to do in this country. A read for everyone!

George drove me back to the apartment and then back to the hospital the next afternoon, to spend the night there before surgery. The room was nice, with purple floor and some purple on the walls. But it was lonely there, I wasn't allowed to leave my room- to give other patients privacy. When I wanted to go for a walk, they gave me a 7pm curfew!! And someone had to escort me to the front door and then from the front door back to my room.

Then came the preparations. It took forever to shave all my fur off; had I known I would shave from my belly down to my knees I would have used my electric shaver at home to make it easier. Then I had to take two of those things that make you poop, 3 hours apart. It really wasn't bad at all; I was expecting to have all this uncomfortable stuff but I guess I got lucky?


At midnight the nurse told me to turn the light off and get some sleep! I felt like I was in an orphanage, lol. The morning of surgery I met some other doctor and then they gave me some shot to put me to sleep and I didn't wake up until after surgery. Gradimir, the anaesthesia guy, was there singing to me when I woke up in my hospital bed. He gave me the arnica remedy I brought from home. And the earring they had to remove for me (because it had to be undone with plyers or something.)

I was miserable- my back and head were aching from lying down in one spot for the 9 hour surgery, and I wasn't allowed to move for 3 days. For some reason they couldn't even put a pillow under my back. I just kept rocking my head back and forth- the only thing I was allowed to move. A while later they rushed me back into the operating room for another surgery because of some bleeding that still hadn't stopped. This time they didn't put me out first- I got to see the OR and experience them moving me from my bed to the operating table. At last-- I got to move!! Then, obviously, they gave me anaesthesia...

I woke up in my hospital bed again, with Gradimir singing again, lol. He gave me more arnica. Total deja vu...

Wasn't allowed to drink for the first day, or eat for the first 3 days, and it turns out that the day of surgery didn't count as far as not moving for 3 days. But each day they let me love a little more, just not the leg they used to hook up the nerves and blood vessels.

The 2nd day post op I was able to move my arms enough to use my computer, which made all the difference. Miro also brought my iPod speakers from the apartment, which totally made me more comfortable and feel at home.

I wish I had brought mouthwash, as I couldn't brush my teeth the first 3 days because I couldn't move. I felt gross from not showering, and I need to wash my hair pretty often. I did a lot of meditating on my hunger and discomfort, accepting/embracing the situation I couldn't change, instead of fighting and rejecting it. Reminding myself that I had WANTED to do this surgery and was FORTUNATE that I finally had my wish come true. Pooping was a nightmare, using the bed pan and having a nurse clean up afterwards. It made those 3 days of not eating seem worth it :)

Day 4 I got out of bed for the first time. Felt like the walking dead! First thing I did was brush my teeth, wash my face, and run some water through my hair. Then I stood by the window to get some fresh air and look at the "view." I also stopped taking pain killers that day, because the injection hurt too much. I found that their tea relaxed me more than anything else, and I'm sure the arnica was helping too.

Day 6 post-op I was already getting in and out bed myself a few times a day, going to the bathroom on my own, and eating at a normal table. The next day I finally got to shower!! I came back to life! Got dressed and Marta drove me back to the apartment.

Marta was my angel during my stay in Serbia. Gorgeous, sensitive, gentle, respectful, funny; they couldn't have picked a better person to visit me every day, change the bandages and remove the drains. She visited me in the apartment a couple of times until my flight back around a week later.

Miro also came to visit once- and brought me a mug as a gift, which I found very touching- and decided that the following day I should come back to the hospital to have my staples and some stitches removed. When I got there, Miro asked if I mind being interviewed by a journalist who was doing some sort of something about the hospital. I had already been in a trans documentary at home, so I was used to being interviewed on film and was excited to be on Serbian t.v., lol. Afterwards, the journalist told me that I look very happy.

There's a beautiful park about a 5 minute walk from the apartment, though post-op it took more like a half hour. I managed to visit it twice, sat on a bench the first time and on the grass under a shady tree the second time (because some people had the nerve to occupy my bench!) The cool thing about having a catheter hanging out of your stomach is that you can take a leak without anyone noticing. You just kind of sit there doing whatever you were doing (i.e., nothing) while pee just trickles out of this tiny tube.

Miro was off to Japan the day before I flew home, and he had wanted to hang out with me the morning of his flight. He called to apologize that he doesn't have time, and to wish me all the best and that he hopes I'll be pleased with the results. From start to finish-- even from my first e-mail to him a year ago-- he was caring, patient, committed.

George drove me back to the airport and helped me with my luggage up to the check-in.

Funny story- for the first month post-op I have to walk with my thighs very far apart, to give my balls their space. When I landed and was getting my suitcase from the conveyer belt, an undercover cop stopped me because he thought I was smuggling drugs! And just as luck would have it, all my surgery papers were in the suitcase and I was in no shape to rummage through everything to find it, so it was easier to just pull my pants down for him. I was so excited to show Buddy off, but as soon as the cop saw the catheter and stitches he said it was enough... How disappointing that he didn't want me to unwrap Buddy's bandage...

I had my "period" the first 2.5 weeks post-op. It's normal to bleed anywhere between 2 weeks and 2 months after a vaginectomy. In the hospital, it was very uncomfortable, because the pad they put would move and then I would feel it trickling down. I also didn't like seeing the blood stain on my bed when I would get out. Another 2 dysphoric things were the sharp pain in my vagina if I would move too much, walk too far, etc., and also I couldn't find my balls the first like 8 days. Not only that, but when they were touched, I felt the same sensation as when my labia/clitoris were touched, so I was convinced that they forgot to do scrotoplasty. This dysphoria didn't go away until I got back to the apartment and saw part of them in the mirror.

3 weeks post-op I removed the stitches and catheter. The 2 nurses here were super trans friendly and even excited to see a phalloplasty. They kept saying what nice work Miro did, what a nice job. Toward the end, the nurse who had been holding Buddy up, announced that she's in the mood of a hot dog :)

The first few times I peed through my new urethra, I didn't notice any leaks, or thought that maybe it was just dripping back down. But then it started to really leak, so I switched back to the catheter coming out of my stomach. Next week I can try peeing again regularly. And I love how "regularly" means through my penis. Just the way I had always wanted it, the way that feels "right" to me.

Two days ago I took Buddy out to play for the first time. I took a really good look at him with a hand-held mirror, stroked him, held him in different positions and looked from different angles. It was really the first time I've ever seen him as part of my body (as opposed to this surgical thing I need to clean and be careful with and always have something supporting him so he doesn't fall off.) And I was filled with peace, love, and joy. A few hours later it really hit me- I just cried, as I repeated over and over:

Some days you just need to have someone in Government who actually understands! Thank god for these guys, seriously! 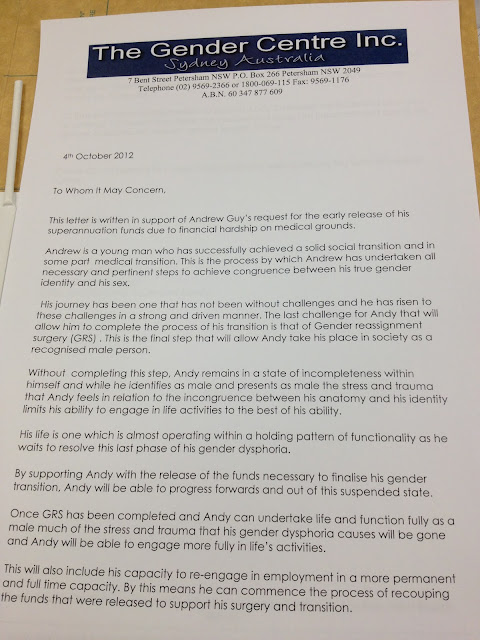